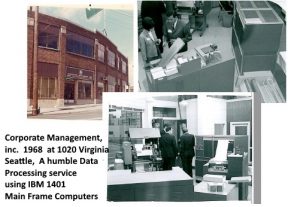 It all started with an idea to service Seattle’s data processing needs.  We began business by opening our ompany, then called Corporate Management, Inc. (CMI) in the year 1968.

Over the almost five decades since then, we’ve continually built our reputation with excellent customer service and creative solutions for our clients’ needs. 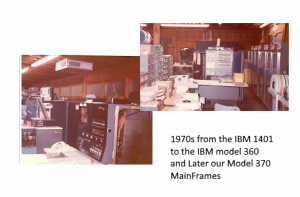 As the computer industry changed, CMI continued to evolve.  We began working with newer main frames.

The micro computer revolution began in the latter part of the 1970s, and that became our company’s primary focus.  We built kit computers like the Sinclair Z81 and became a reseller for NEC systems, selling the NEC Astra Minicomputer system and the NEC APC Microcomputer.  The Astra was very popular for managing telephone call accounting.  At that time, long distance calls were so expensive that every large company was concerned with reducing cost.

Our halo PC product, the NEC APC Microcomputer was a very high performance PC, but was expensive.

Popular software like Lotus 123 was not available for the APC, but we developed solutions.  One of our employees created a port (conversion) that allowed Lotus to run on his APC.  That version was later “blessed” by Lotus Corporation and sold worldwide.  We developed and marketed a SCSI external hard disk drive with a custom logic board that we manufactured ourselves.  We also contributed our APC port to the open source library of then popular data transfer software Kermit for CP/M and MSDOS.  The NEC played an important part of demonstrating that with Microcomputers, there were infinite possibilities.

By the mid-1980s, working with IBM compatible PCs was the dominant part of our business.   We purchased a 2 story 5700 s.f. commercial building in North Seattle to accommodate our growing business.  Because of the changing focus of our services, we renamed our company Corporate Computer, Inc. (CCI) and have since focused on PC technology and solutions.

The 1990s really shaped our company into what it is today.  We created the first modern PC based network for sports event broadcasting.  We wrote highly customized software, and designed and managed the data network for the 1990 Seattle Goodwill Games.  For that project, we set up a PC based email system that was extremely successful.  This demonstrated that PC networks would become the platform for social communications.  Our network caught the attention of Microsoft which then allowed us to be one of the five pilot Microsoft Solution Provider companies.

Thanks to our experience with database programming, we easily made the transition to SQL Server development, writing one of the first commercial database systems on the Microsoft SQL server for a then-local company, Shuttle Express.

Our broad experience lead us to believe that the internet and email would become essential to corporate systems.  We started one of the first commercial email services in Seattle in 1993 with our CCI-Net email solutions.

We are proud of our pioneering contributions to the Internet industry, including our DNS server for Windows NT which was used as a basis by Microsoft to create MSN and was also used by thousands of companies worldwide, our SMTP Server for NT and our ADA 95 compiler which we donated to GNU Open source foundation.  The ADA 95 compiler is used by institutions like the European Space Agency.

We continue to offer your company our creative and technical expertise and provide you with support, engineering, and security.